It is roughly translated as "To have an intense fear based on an event in the past.” in English. We have included both the Chinese and the English versions of the story below. 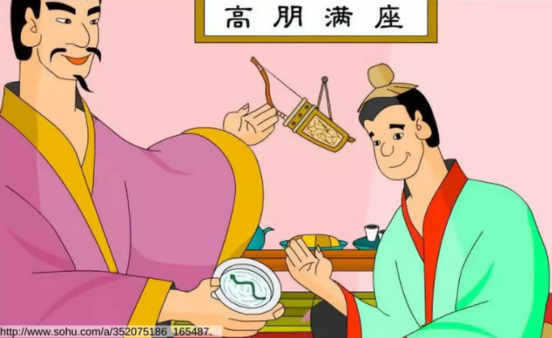 One summer, Xiàn Lìng invited Dù Xuān for a drink. They met at a big hall, and on the north wall of this hall was a painting of a red archery bow. Because of how the light refracted, the image of the archery bow appeared in their glass. Dù Xuān was startled to see the refraction and thought there was a snake wriggling in his glass. But as Xiàn Lìng was his superior and had invited Dù Xuān, especially for a drink, there was no way he could refuse to drink it. So he stiffened up his upper lip and took a few sips.

When they got home, Dù Xuān became increasingly worried about the snake in his drink and felt like it was wriggling in his stomach. His stomach started to hurt, and the pain was unbearable. Eating and drinking became increasingly difficult. His family members called the doctor to treat him, but he did not get any better, even after taking a lot of medication.

Xiàn Lìng heard about this and asked how he got so ill. So Dù Xuān had to tell him about the snake in his glass. Xiàn Lìng thought this was very strange. He returned to the hall and went over the events of that day in his mind. He could not figure out how the snake got into the glass. Suddenly, the archery bow on the wall caught his attention. He rushed to where Dù Xuān sat that day, filled a glass, and sat down exactly as he was that day. 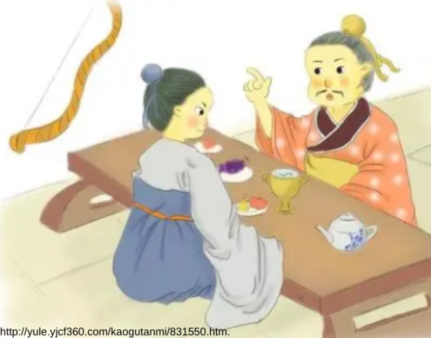 He discovered that the archery bow created a reflection, and if you weren’t careful, you could easily mistake it for a wriggling snake. He instantly summoned his people to bring Dù Xuān over. He asked him to sit at the same seat he was at that day to have a closer look at the reflection in this glass and said: “You said there was a snake in your glass, but it was nothing more than the reflection of the archery bow painting. Nothing strange, you can now relax.” Once the story was cleared up, Dù Xuān’s worries disappeared. He also made a full recovery.

This idiom means to mistake a reflection of an archery bow for a snake. It is a metaphor for when suspicion and doubt become a phobia.