“Waiting around aimlessly for a windfall that is unlikely to come.” 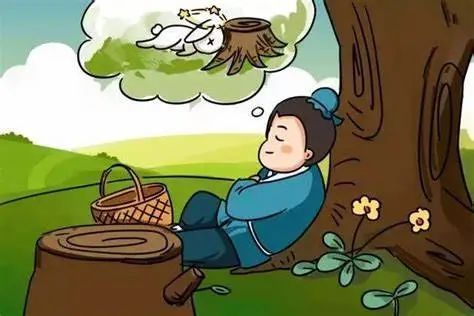 Every language has idioms, sayings, or set phrases. Chinese is no different. In Chinese, an idiom is called 成语 (chéng yŭ) and is usually composed of four characters.

Today, we want to share the story behind the popular idiom ”守株待兔“ (shǒu zhū dài tù) with you. This idiom comes from Wu Du, by Han Feizi, written during the latter years of the Warring States Period. It is roughly translated as “to wait by a tree for a hare” in English. We have included both the Chinese and the English versions of the story below.

宋国有个农民，他的田地中有一截树桩。一天，一只跑得飞快的野兔撞在了树桩上，死了。农夫很高兴，捡起这只死兔子回家美美地饱餐了一顿。他想每天都有这样的好事就好了。于是，农民便放下他的农具，整天守在树桩子旁边，等着送上门来的兔子。一天，两天，三天，庄稼全枯死了，却再也没有捡到跑来撞死在树桩上的兔子。而他自己也被后人耻笑。There was a farmer that lived in the state of Song. He had a tree stump in the middle of his field. One day, a hare bolted across his field, hit the stump, and died. The farmer was thrilled, he picked up the hare and went home to enjoy a delicious dinner. He hoped that he could be this lucky every day. So he left his farming tools behind and waited by the stump all day for another hare to be delivered. A day passed, then another, and another. His crops all withered, and yet he still did not have a hare hit the stump. He became a laughingstock for generations to come.

This idiom is a metaphor for those that don’t take initiative or work hard and bank on good luck to succeed.

These days, the competition in society is fierce; if you wait around aimlessly, eventually you will be left behind.

The police laid in wait for a few days; eventually, the felon appeared.

How would you use the idiom?

Is there a similar one in your country?

Let us know in the comments below!