To mend the fence after the sheep are lost

Every language has idioms, sayings, or set phrases. Chinese is no different. In Chinese, an idiom is called 成语 (chéng yŭ) and is usually composed of four characters.

Today, we want to share the story behind the popular idiom "亡羊补牢"; (wáng yáng bǔ láo) with you. This idiom comes from “Strategies of the Warring States”, or Zhan Guo Ce (战国策), and the following story is a retelling of the original story. It is roughly translated as “To mend the fence after the sheep are lost” in English. We have included both the Chinese and the English versions of the story below. 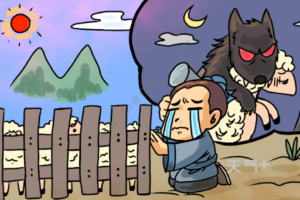 Once upon a time, there was a man who had a few sheep. One morning he let the sheep out to graze and realised that one of his sheep was missing. As it turns outs, the sheep pen was slightly broken, leaving a little hole, allowing a wolf to crawl through and take one of the sheep. His neighbours warned him to quickly fix the sheep pen and cover up the hole. But the man replied, “The sheep is already gone, why bother fixing the pen!”

The next morning, he let the sheep out to graze and realised that another sheep was missing. As it turns out, the wolf had returned to the hole in the fence and took another sheep. He deeply regretted not listening to the advice of his neighbours and decided it’s still not too late to fix the pen. He immediately went to repair the hole in the fence. From that day onwards, he never lost a sheep again.

This idiom tells us that we shouldn't be worried about getting something wrong, we should be concerned about not being able to correct ourselves in time. Once the time’s past, we might not even have the chance to redeem ourselves.

Everyone makes mistakes; as long we know to correct our mistakes, there's always time.

This is only a small test, it’s okay if you don’t get a good grade. Once you know where to improve, it’s never too late, there's always time.

How would you use the idiom?

Do you have an idiom you'd like us to explain?

Let us know in the comments below!