日 rì is the Chinese character and Chinese radical for the sun. The rì radical (日字旁 rì zì pang) dates back as far as the oracle bone inscriptions of the Shang Dynasty. The character was initially rounder and resembled the sun, with a dot in the middle marking the sun as a luminous body.

Because the rising sun symbolizes the beginning of a new day, 日 rì also means “day”; when a horizontal stroke appears at the bottom, 日 rì becomes 旦 dàn meaning “dawn”, as it depicts the sun rising over the horizon. 日 rì is a component of plenty of other characters related to the sun or daytime, such as 明 míng (bright) and 时 shí (time). In the character 明天 míngtiān (tomorrow), the sun (日 rì) and the moon (月 yuè) are side-by-side, symbolizing how the sun and the moon take turns in the sky as a day passes. The water radical 氵shuĭ (in Chinese 三点水 sāndiǎnshuǐ, or “three drops of water”) is another prominent radical from nature. The three drops of water always sit on the left side of the character, indicating the “liquid” nature of the word they depict, for example 河 hé (river), 海 hăi (sea), as well as 流 liú (to flow).

When it comes to the origins of 河 hé, the element 可 kĕ is a phonetic component, as “hé” and “kĕ” rhyme. 海 hăi, the sea, derives from the 氵shuĭ radical along with 每 měi (each), which is also a phonetic component, although more distantly related. 流 liú (to flow) is said to originate in the image of an upside-down baby at the moment of birth, with amniotic fluid flowing down.

However, scholars of Chinese etymology often hold different views as not all etymology can be clearly traced.

流 liú (to flow) = 氵＋ 巟：Ancient oracle bone inscriptions portrayed a baby at the time of birth, upside down, with amniotic fluid flowing from the newborn.

The radical 木 mù (木字旁 mù zì páng) means "wood" and is the pictorial image of a tree. It is found in a multitude of Chinese characters associated with wood. 树 shù (tree), 村 cūn (village), and 枝 zhī (branch), for instance, all carry the wood component. They are picto-phonetic, with 木 mù representing the meaning, and the remaining element of the character indicating the sound.

木＋木＋木＝森：Lots of trees make a forest.

林 lín symbolizes two trees next to each other, turning them into a small forest, while 森 sēn is the image of three trees grouped together, symbolizing a bigger forest. 本 bĕn (root, foundation) looks like a tree with a horizontal line at the bottom, which is interpreted as a simplistic version of a root.

The radical 土 tŭ (soil) (土字旁 tŭ zì pang) means “earth”. Ancient versions of the pictogram symbolized a lump of mud on the ground as mud, earth, and soil were a basic necessity and valued material for building shelter and crafting earthenware.

The 土 tŭ radical it is commonly placed on the left or bottom of the character, as in 地 dì (earth), 城 chéng (city), or 基 jī (basic, foundation). All three examples are phono-semantic compounds, made up of the radical which carries the meaning, and the remaining element, which defines the sound. The word 基本 jībĕn (fundamental, basis) draws from both 本 bĕn (root) as well as 基 jī (foundation), which respectively contain the wood radical 木 mù and the earth radical 土 tŭ, to create a strong visual image of the deep-rooted association with nature.

山 shān (mountain): The three pinnacles of a mountain range reappear in many Chinese words. A rock at the base of a cliff: 石 shí looks like its meaning.

Often, characters containing the stone radical 石 shí are related to either stone itself, or to associations of solid elements.

岩 yán, containing the 石 shí radical along with the mountain radical 山 shān, resembles rocky terrain by a mountain and means “rock, cliff, or cave”.

The character 泵 bèng (to pump), is another example of an ideographic character containing the 石 shí radical: in combination with the character 水 shuĭ (water), it is a pictographic image of “getting water out of stone“. 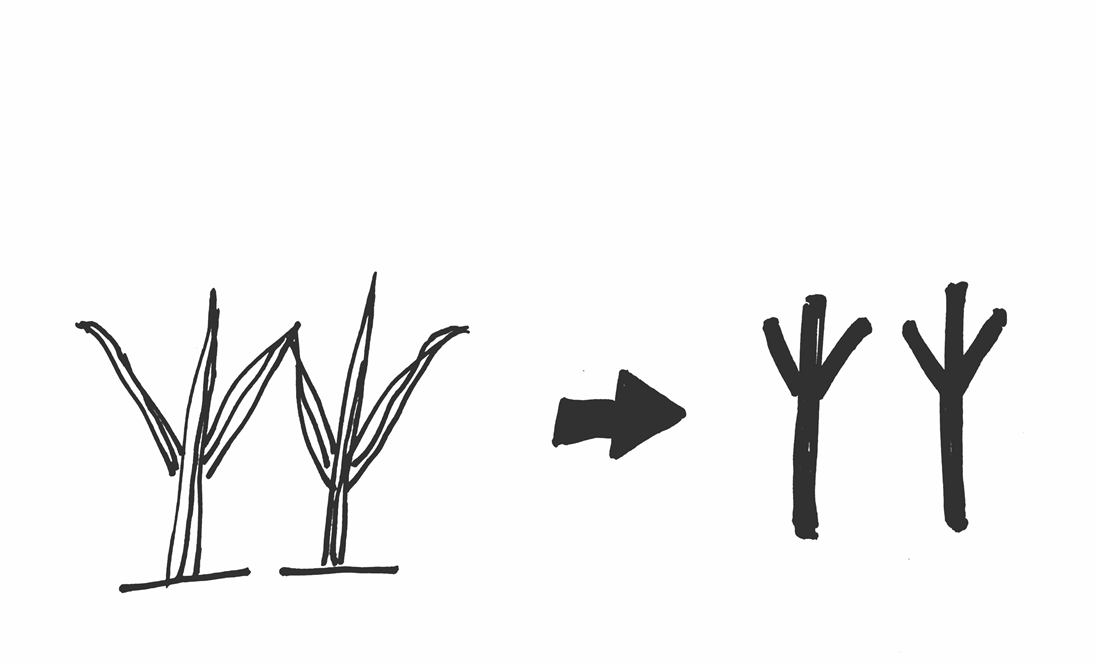 A picture is worth a thousand words, and this one shows two strands of grass: 艹 cǎo (grass).

The 艹 cǎo radical is often found in characters related to grass and plants, including teas and herbs. It never stands alone and is always part of character compounds such as 花 huā (flower) or 药 yào (medicine).

While 花 huā (flower) is a phonosemantic compound, with the 艹 cǎo radical reflecting the meaning and 化 huà indicating the sound, 药 yào (medicine) is a graphical modification of two elements: the艹 cǎo radical indicating the herbal nature of traditional Chinese medicine, and the element 约 yuē which goes back to an ancient, stylized image of a medicine mixing tray. Interestingly, the image also resembles a joyful person who has recovered from an illness: 药 yào (medicine): Once the treatment takes effect, the patient will regain his health.

茶 chá (tea) is believed to be related to the character 荼 tú, which in ancient times meant “bitter vegetable“ as tea leaves were less processed and had a bitter taste.

The radical 田 tián (田子头 tián zì tóu), a pictographic image of a field, is another common radical found in Chinese characters today.

In the ideographic character for “male“, 男 nán, the 田 tián radical is combined with a simplified image of an ancient farm tool or plough. As the fields were mainly plowed by men, the pictograph eventually became the character 男 nán for “male“. Men at work: Over time, the picture of the farm plough and the field became the Chinese character for male: 男 nán.

画 huà (painting/to draw) also contains the 田 tián radical. It has evolved from the ancient image of a hand holding a writing brush聿 yù. In the traditional version of the character, 畫 huà, the 田 tián radical may have represented the idea of drawing boundary lines between fields. What used to look like a brush held by a hand, has turned into the character 画 huà (to paint, to draw).

Not all characters containing the 田 tián radical are related to fields, though. 电 diàn (electricity), for example, might look like a power line across a field, but in reality goes back to the pictograph of a lightning bolt in a rain cloud.

Rain and lightning make up the radical for electricity: 电 diàn.

Similarly, 思 sī (to think) seems to point at a meaning related to a heart (心 xīn) and a field, while in reality the 田 tián (field) radical in the character 思 sī is a simplified version of a character associated with the head: 囟 xìn.

The radical for one of China’s favourite foods, rice, 米 mǐ (米字旁 mǐ zì pang), resembles the simplified image of grains of rice separated into compartments. The rice radical often occurs in characters related to food made from rice or grain. A classic example is 米粉 mǐ fěn (rice-flour, rice-flour noodles) with 粉fěn (powder) also containing the 米 mǐ radical, reflecting what the powder is made of.

玉米 yù mǐ, literally “jade-like rice“ is the name for corn or maize. Originally called fan-mé, “wheat of the Western barbarians“, maize is believed to have entered China sometime in the 14th century when the term 玉米 yù mǐ was first used in a poem.

Similar to the 艹 cǎo (grass) radical, the 竹 zhú (bamboo) radical is the image of two stalks of the bamboo plant. The 竹 zhú radical in Chinese characters often refers to utensils made from bamboo or used for writing. 笔 bǐ (pen, brush) is a classic example, as the traditional character depicts a writing brush (聿 yù) which in the old days was typically made from bamboo.

Well-known examples are the bamboo flute (笛子 dizi) and the pan flute (排箫 páixiāo). The other seven types of instruments, by the way, are made of metal, stone, clay, leather, silk, wood and gourd.

笨 bèn (stupid) also contains the radical for bamboo. Why? What is stupid about bamboo? Nothing! In ancient times, 笨 bèn was actually a term describing the inner layer of bamboo cane which was a valuable resource for making paper. In fact, it was so precious that sometimes beautiful girls were called 笨 bèn – something you shouldn’t try today!

As with these illustrations, observations from nature were transformed into symbols and shapes, often keeping their pictorial structure over time. Chinese characters today still carry rich connotations of the concepts they represent, making them living pieces of history.

When it comes to learning Chinese, there really is no need to drum the vocabulary into your head. Just open your mind to the depth and richness of the language.

As the ancient Chinese proverb says, “when drinking water, remember the spring”, or in other words, “when learning Chinese characters, remember their radicals”.