For anyone learning the Chinese language, it would be easy to be intimidated by Chinese characters. Fret not! In truth, it’s in learning what makes up a character, and how you classify it, that gets you a much richer and deeper understanding of it, the language, and the culture as a whole.

One facet of this deeper understanding comes from learning how Chinese characters are classified. Let’s take a look at Chinese character classification, and what learning this can do for folks hoping to decode this incredible language.

First, what are Chinese characters?

Chinese characters, or wénzì 文字, are the written language for Chinese. These are what seem most unfamiliar to those learning the language. Unlike pīnyīn 拼音, or the romanization of the Chinese language, Chinese characters will likely look far different than most other languages.

Luckily for us, there is a logic to this written language that will help any Chinese language learner as they dive into Chinese characters.

This is where Chinese character classification comes in.

How many types of Chinese characters are there?

Before we move on, let's take a look at two characters from this title.

First, there’s wén 文 (character, language). When it comes to Chinese characters, some are made up of a single element, like shān 山 (mountain), or wén 文 itself.

Then there’s zì 字 (word, character). Often, these are characters that are made up of two or more elements, like hǎo 好 or zì 字.

While it was not the first comprehensive Chinese dictionary, the Shuōwén Jiězì was the first text to analyze character structure in a thorough way. It was written by Xǔ Shèn, a Chinese philologist, calligrapher, politician, and writer. One of Xǔ Shèn’s aims in writing the Shuōwén Jiězì was to help decode the meaning of ancient texts. In doing so, those documents could then be used by the government to bring more order and solidify their rule.

In observing the tracks left behind by birds in the snow, Cāng Jié had the idea to create pictures to represent the animal that left them. This expanded to the development of the pictographs that eventually made up the first set of Chinese characters.

Despite these clear political motives, it was politics that actually delayed the presentation of the Shuōwén Jiězì to the emperor after it was completed.

While the document was finished by 100 C.E., the imperial attitude toward scholarship and literature was quite unwelcoming. Therefore, Xǔ Shèn waited until 121 C.E., asking his son to submit the manuscript to the new emperor.

Whatever Xǔ Shèn’s original aims, the Shuōwén Jiězì did a lot to organize and analyze Chinese characters. In fact, he helped to create what we know today as bùshǒu 部首 (radicals).

There are six principles within the Shuōwén Jiězì to classify characters, otherwise known as the liùshū 六书. Let’s take a closer look at the six Chinese character classifications.

These pictograms are essentially stylized drawings of objects they represent. There are around 600 Chinese characters that fall under this classification. Many of the ancient characters are classified as xiàngxíng characters. 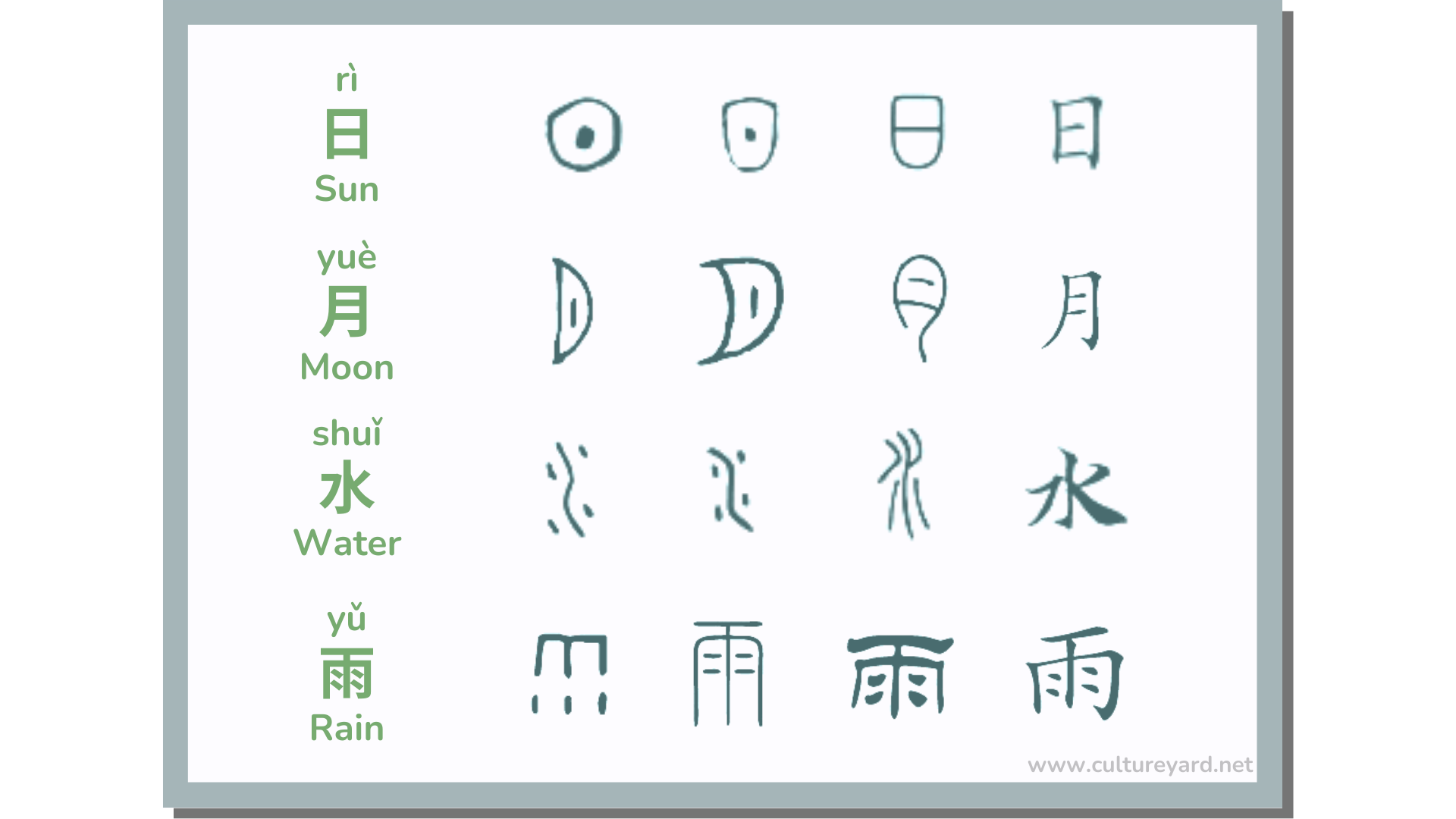 Also known as “self-explanatory characters”, these ideograms are characters that are intended to symbolize abstract ideas.

Also known as phonograms, phonetic compounds, or determinative-phonetic characters, this is the classification in which the vast majority characters fall. These characters combine both a semantic and phonetic element. Essentially this means there is one component of the character that indicates its meaning, while the other component indicates the sound. 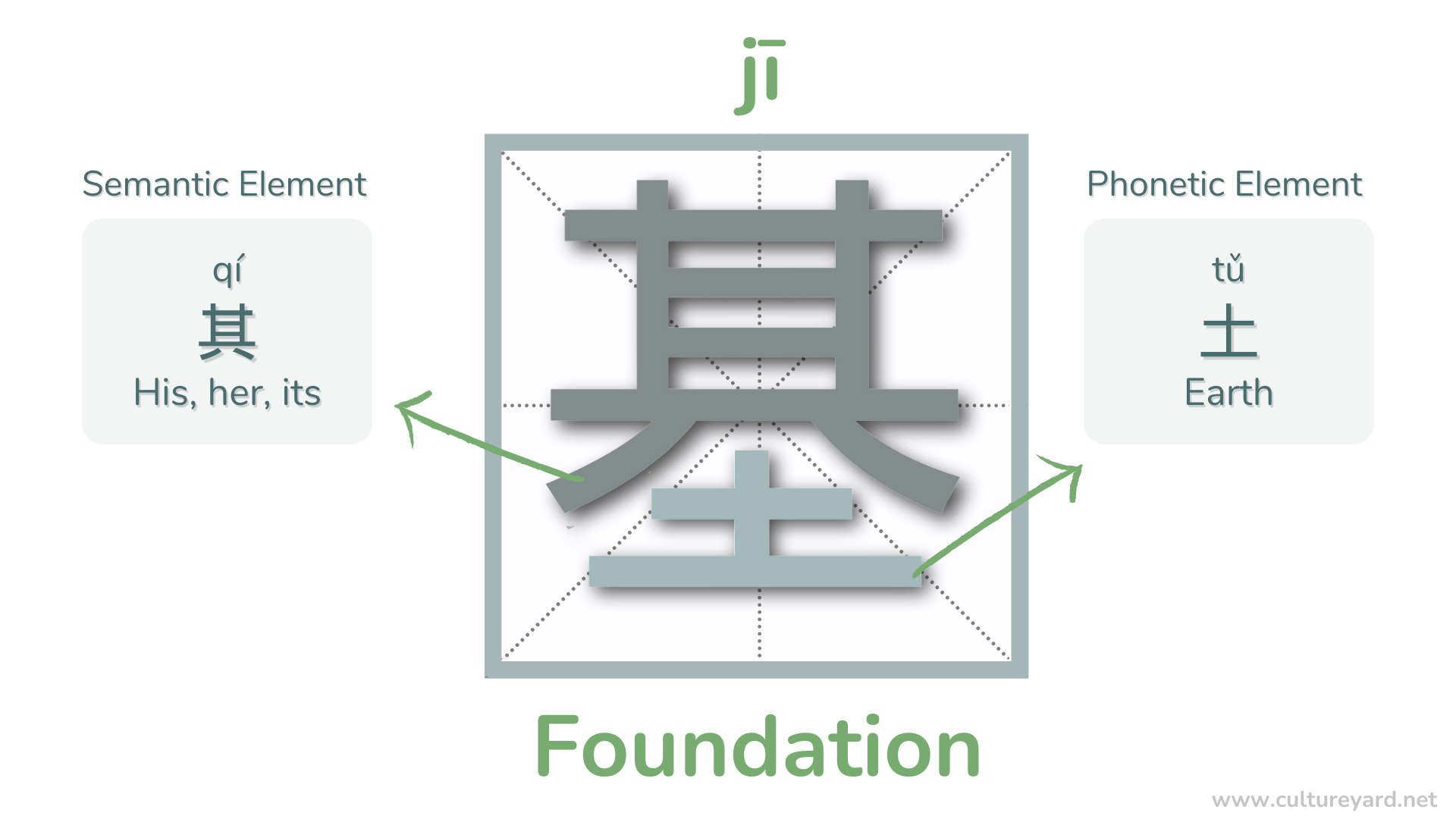 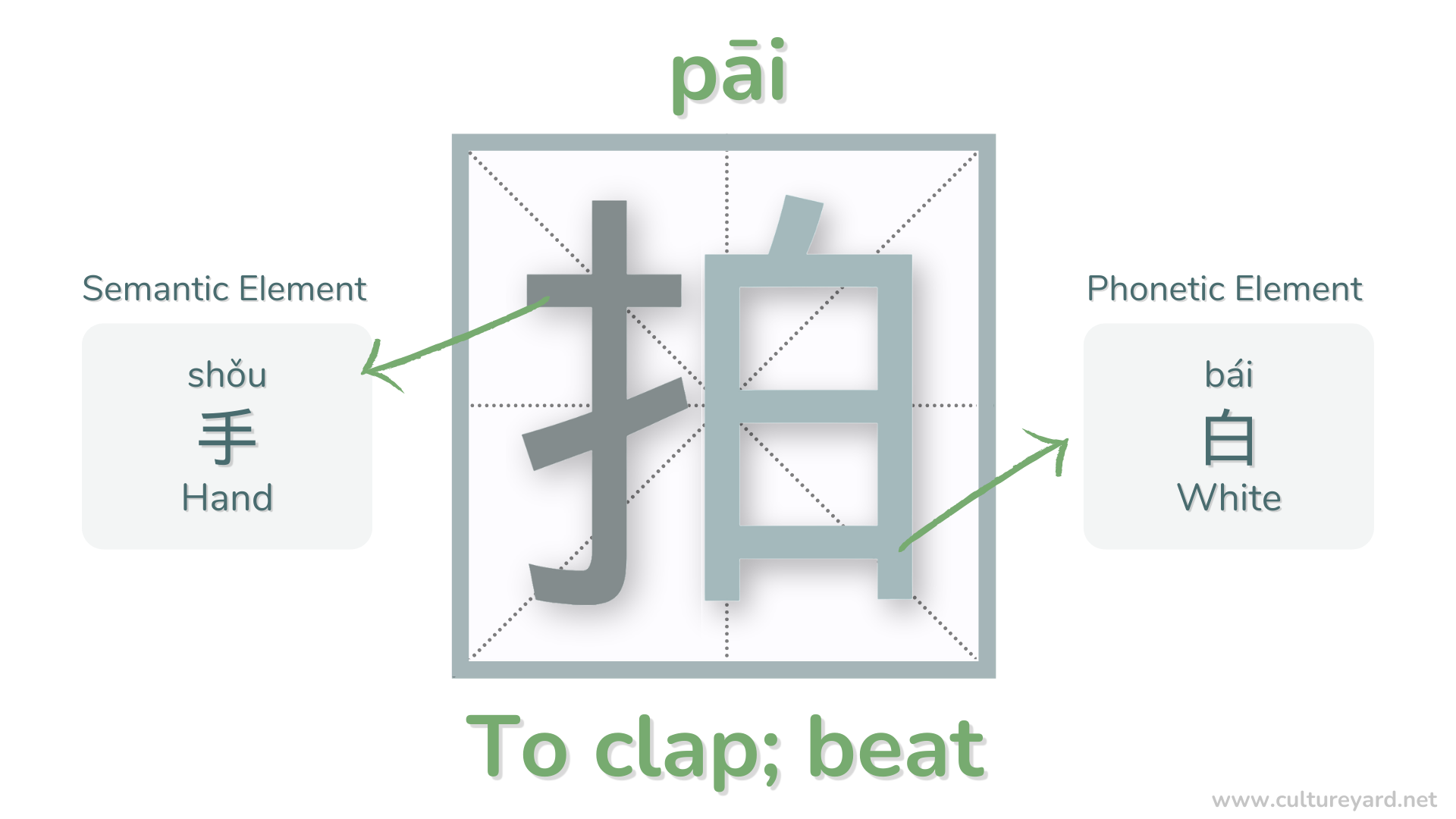 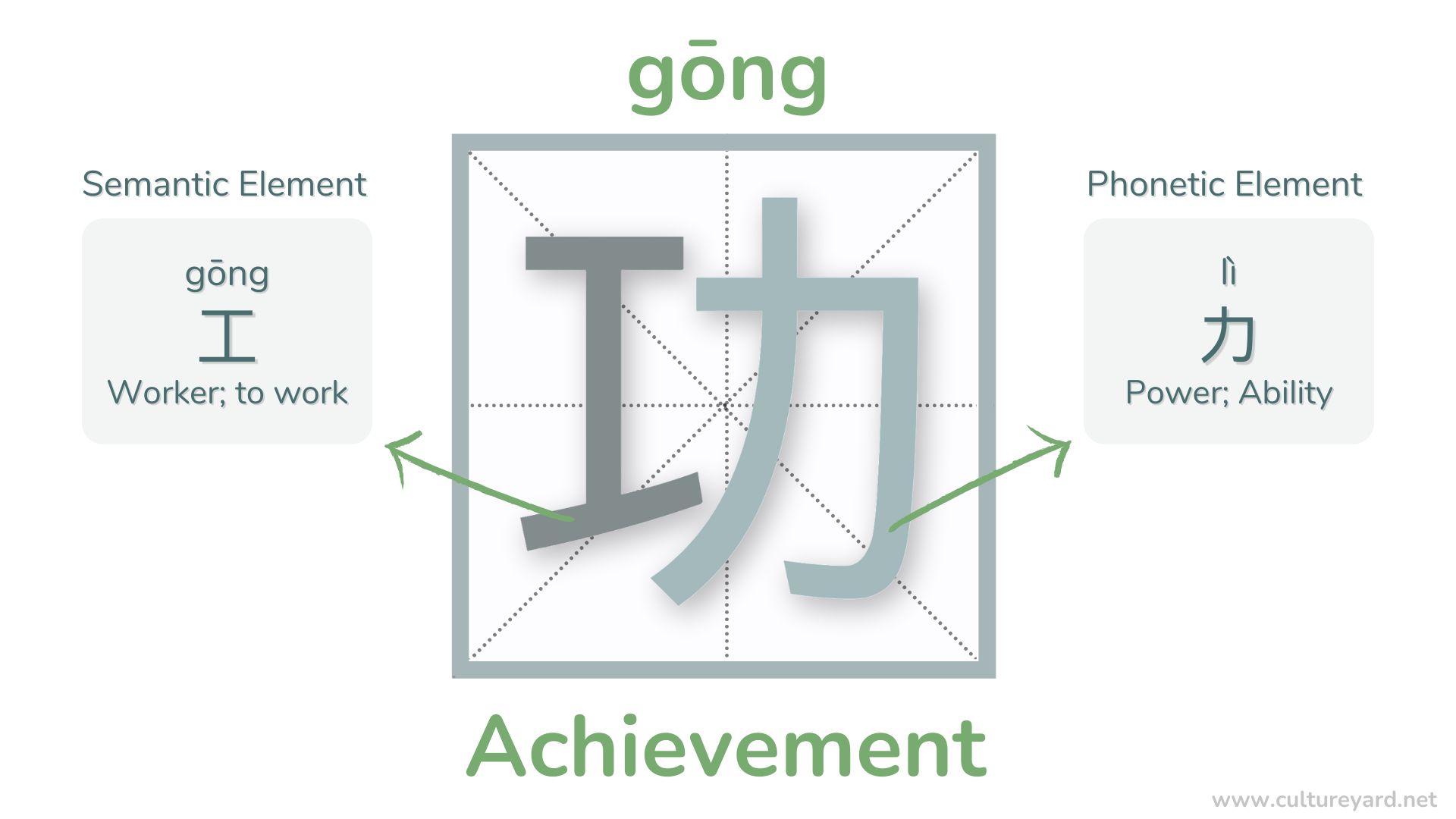 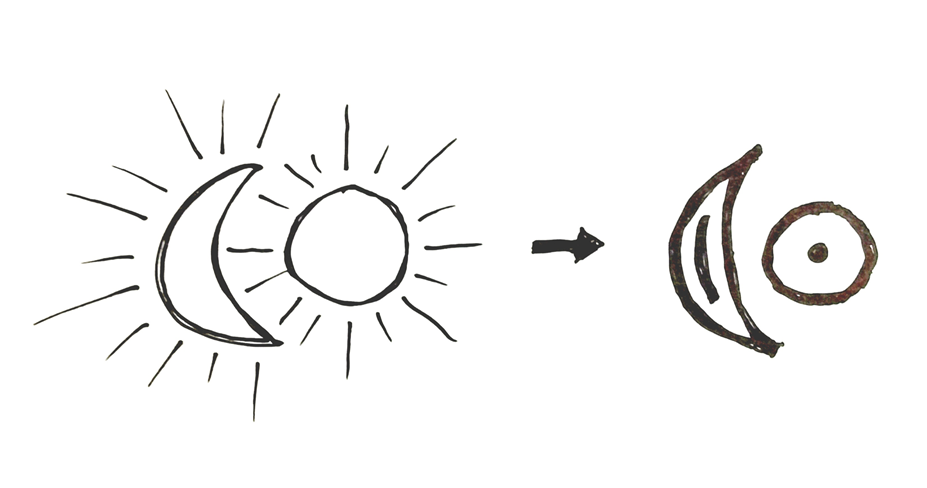 Fun fact: many of the characters Xǔ Shèn initially classified this way were deemed incorrect and were later re-classified.

Also known as phonetic loans, these are characters that have been borrowed from (or mistaken for) other characters over the years.

běi 北 (north) Initially, this character meant “back (of the body)”, which is now written as bèi 背.

yào 要 (to want; to ask for) The initial meaning for this character was “waist”, which is now written as yāo 腰 (waist, small of the back).

Also known as “mutually-explanatory characters”, this is the classification that holds the fewest characters and is also the trickiest to grasp.

Essentially, characters with the same etymological root or similar radicals will create two separate words. Think of it as modifying or distorting a character to form a new one. Interestingly, these characters were often interchangeable centuries ago, but now hold different semantic meanings.

So why should I learn the different types of Chinese characters?

While Chinese character classifications may seem useless to your studies at first glance, they are certainly worth learning. Here’s why:

Learning these classifications may help you memorize the characters more easily.

It’s true! Take shān 山 for example. If you know this character is a pictogram, it will be easier to remember its meaning by seeing what it looks like - a mountain! If you encounter sēnlín 森林, and you know it’s considered an associative compound, you’ll note that there are multiple mù 木 components and be able to derive the meaning - “forest” - more easily.

This is especially true for picto-phonetic characters. If you know a character falls under this classification, you’ll know to look for multiple elements. From there, you may be able to identify the semantic and phonetic elements without a dictionary!

These classifications help you better understand the culture behind the characters.

When studying a new language, you’re bound to learn not only grammar rules and sentence structures, but also lessons on the culture that created the language itself!

As you saw, each of these classifications have roots in the origins of written Chinese. As you parse characters and learn how to classify them, you’ll also gain insight into the history and culture that gave rise to the Chinese language we use now. 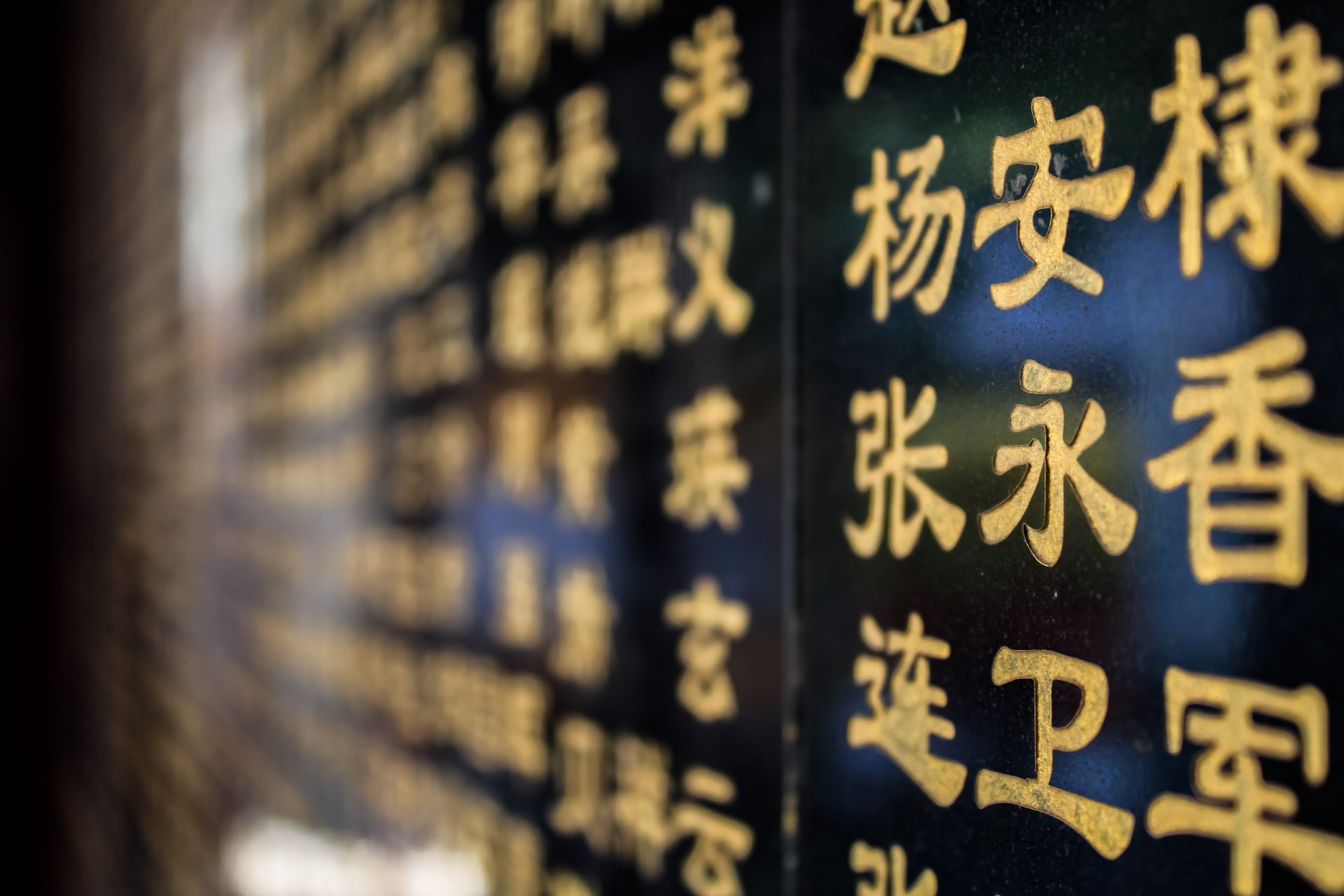 We wish you luck as you dive into these classifications in your own studies!