Today, we want to share the story behind the popular idiom “滥竽充数" (làn yú chōng shù) with you. It is roughly understood as “masquerading” in English.

The story below is written to help boost your Chinese reading skill (HSK 4+) while telling you the moral behind the idiom.

There was a man named Nan Guo who heard about the monarch’s musicians and thought it was an excellent chance to earn money. He approached the monarch and said: ‘I can play the flute really well; I wish to share my unique talent with you.’ The monarch was so happy to hear this and hired him on the spot, without an audition.

In fact, Nan Guo did not know how to play the flute. Whenever he performed with the other musicians, he just held the flute up and mimicked the others' actions and acted as if the music enthralled him. He relied on deceit to get by, getting paid good money for nothing, and was quite pleased with himself.

But his success was short-lived. After a few years, the monarch passed away, and his son took the throne. The son also loved the flute, but he only liked to hear soloists. He invited all the 300 musicians to come and play individually. Nan Guo heard this and panicked. He thought about it and realized the charade was over. In the dead of the night, he packed up his things and sneaked away.

这个故事告诉人们： 没有真本领，靠弄虚作假终会露出马脚。 This story tells us: If you rely on deceit and lies to get ahead, you’ll eventually get found out. 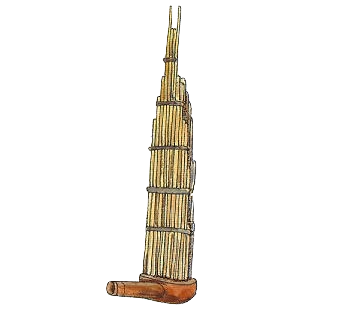 This idiom describes the type of person who pretends to have talent just to get ahead or who takes advantage of others. Sometimes they even boast about themselves.

How would you use the idiom? Do you have an idiom you'd like us to explain?